The Triemli and In der Ey schools are located the foot of the Uetliberg. on a site where the hillside begins to become more gentle. With its generous outdoor spaces, the complex forms the southern end of a larger belt of green and open space that runs through the residential parts of Albisrieden, linking them together. In the form of a square, flat courtyard building, and a second, taller and more compact four-storey volume, the two proposed new buildings are intended as a continuation of the existing pavilion-like ensemble of school buildings and urban green space. More

The proposed replacement building for the Triemli school is set back from the street, giving the stage to the classical architecture of the music school. This gesture is enhanced by the alignment of the eaves with the existing building and the modest, three-storey appearance of the new building. A playground serves as a point of arrival on Triemlistrasse and forms a common area for the Triemli school and the music school.
The extension to the In der Ey school, on the other hand, is located on the lower part of the site, adjacent to the original school buildings from 1935. The proposed four-storey building directly adjoins the existing gymnasium and provides support for its filigree canopy. A new entrance for both buildings is created at this interface, forming a kind of hub between the break area, the sports area and the school gardens.
The careful staggering of the building's height is continued in the terracing of the exterior space. The site interior is characterised by its variety: wooded places, tall deciduous trees, open meadows, areas for play and sport, and sheltered, paved areas that lead from one to the other. By means of subtle interventions, the school complex is developed along the lines of its original concept, and results in a park that should play an important role in the recreation of the school and the surrounding neighbourhood.
The new Triemli school building brings together kindergarten, music school and primary school, along with a dining hall and sports hall. Its two main entrances are aligned with one other but are located on different levels. Between them is a “Rue Interieur”, which connects the jointly used rooms and the outdoor spaces of the two schools. By following the terrain, the passage forms a 1.5-storey spatial layer on the north side, the height of which is coordinated with the multi-purpose rooms and the dining hall. While the sports facilities are located in the two basement floors, the two upper floors each consist of four clusters with classrooms, group rooms and cloakrooms. The heart of the building is the large courtyard that brings light into the interior and allows views through the building and across the floors. Both the horizontal and the vertical circulation adjoin this courtyard.
The new building for the In der Ey school is mainly used for the programme of the primary school. In addition to twelve classrooms, it contains meeting rooms and offices on the ground floor and spacious seminar rooms and workshops on the top floor. The classrooms occupy the two middle floors and are distributed in four L-shaped clusters, each of which also includes a group room and a supervision room. The circulation runs through the middle of the building, forming a space where people can sit and interact.
The internal logic of both buildings can be read in their facades. Timber-clad horizontal bands trace the individual storeys, overlapped by vertical elements that reproduce the internal structure and lend a rhythm to the facades. The plinths are made in prefabricated fibre cement elements. Fine, slightly projecting roof edges emphasise the horizontality of the buildings. The white washed timber facade of the new In der Ey school building relates to the white plaster of the existing buildings. The new Triemli school building is more its own thing. There, the contrast between the grey base and the floors above made of pre-weathered (greyish) wood dominates. Even though they have subtle differences, the two new buildings speak a common language.
Less 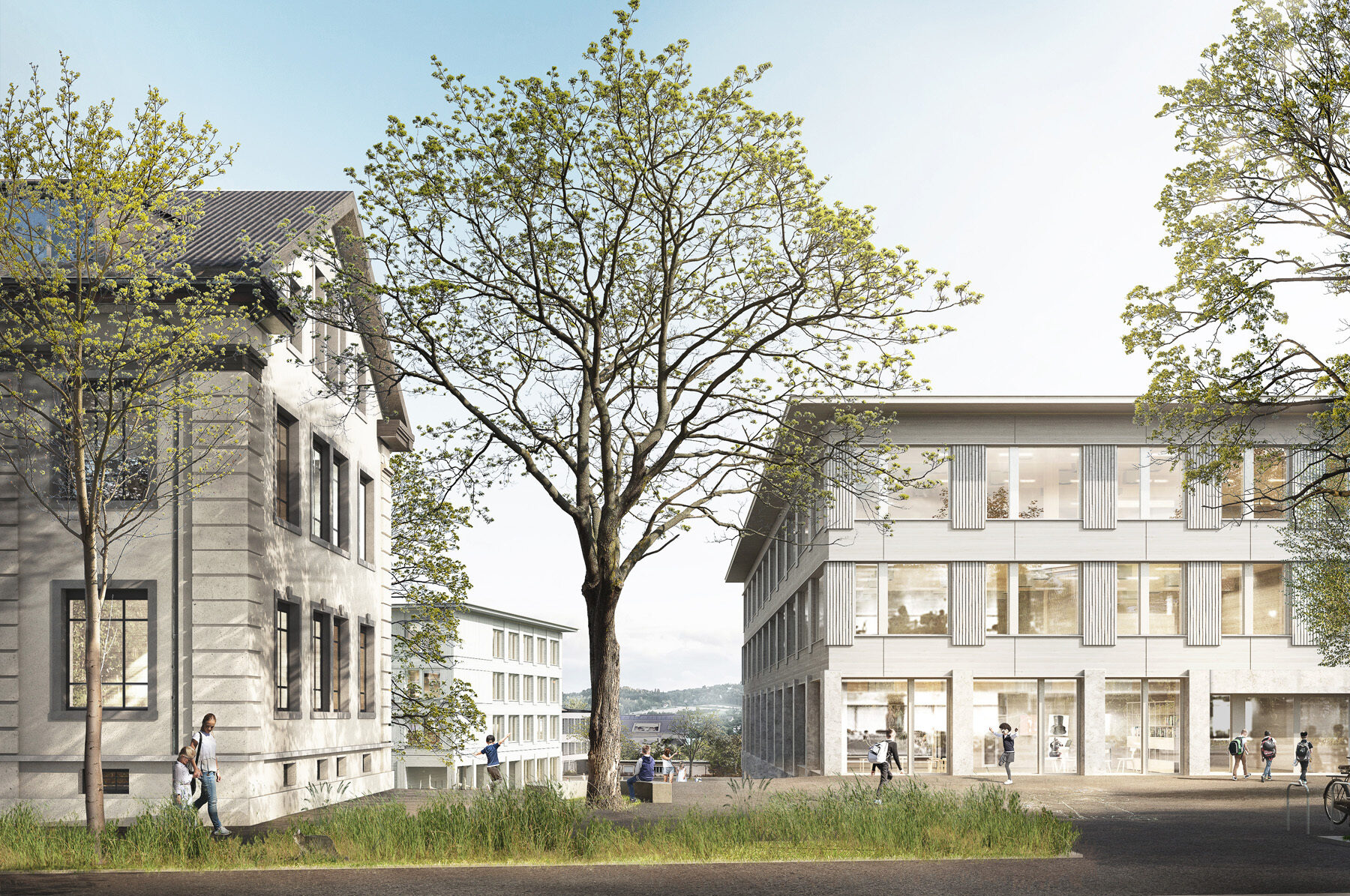 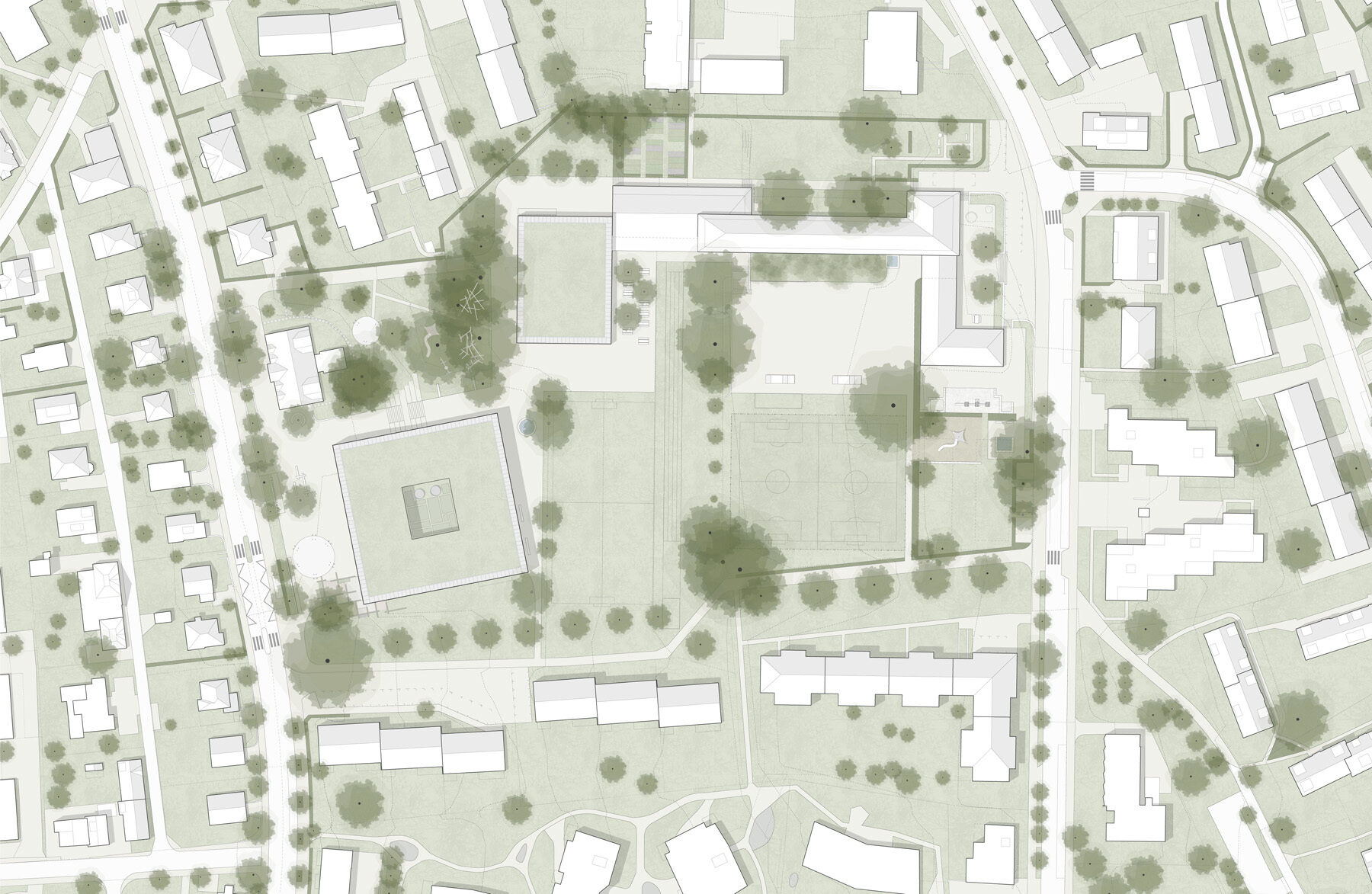 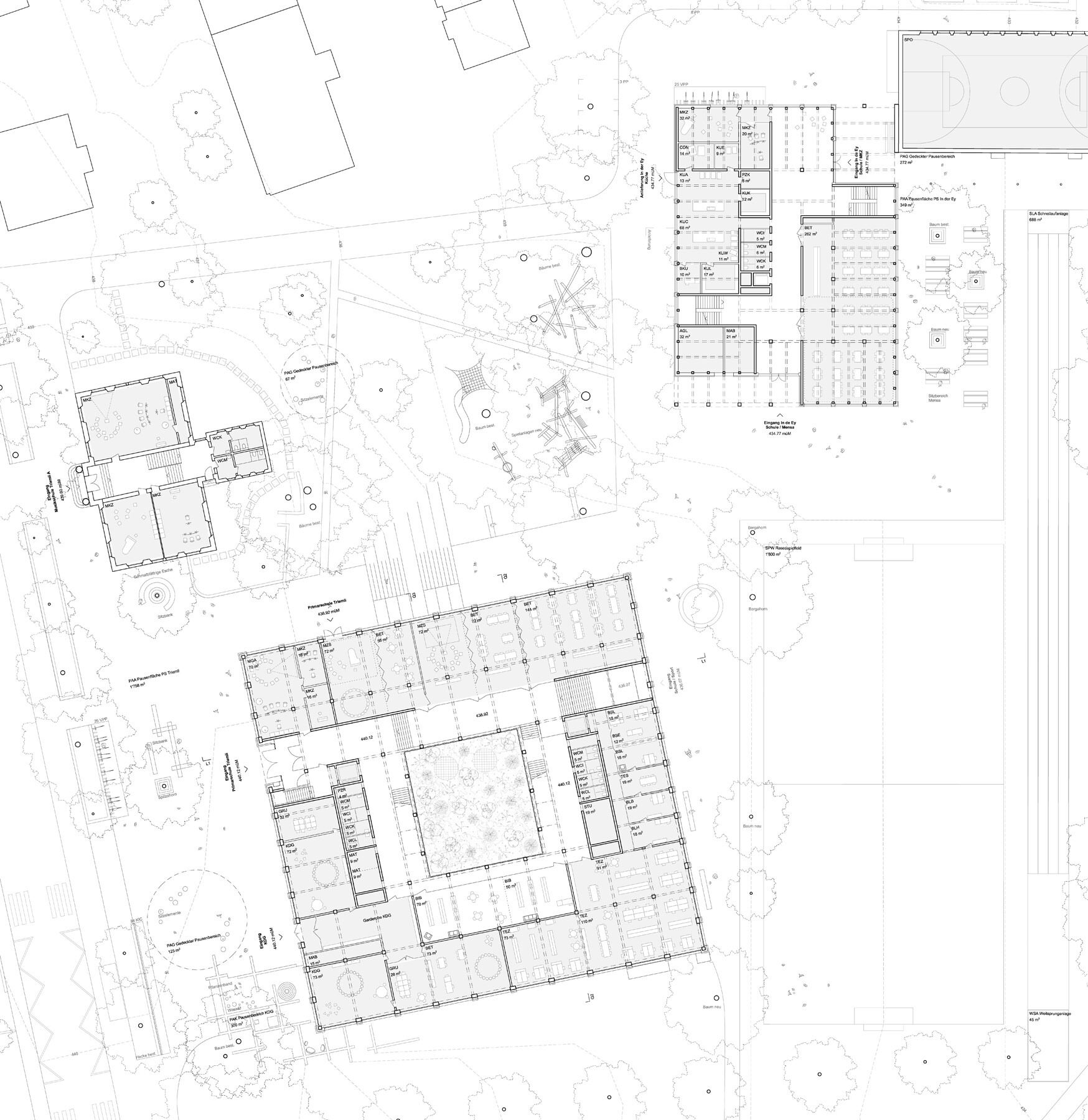 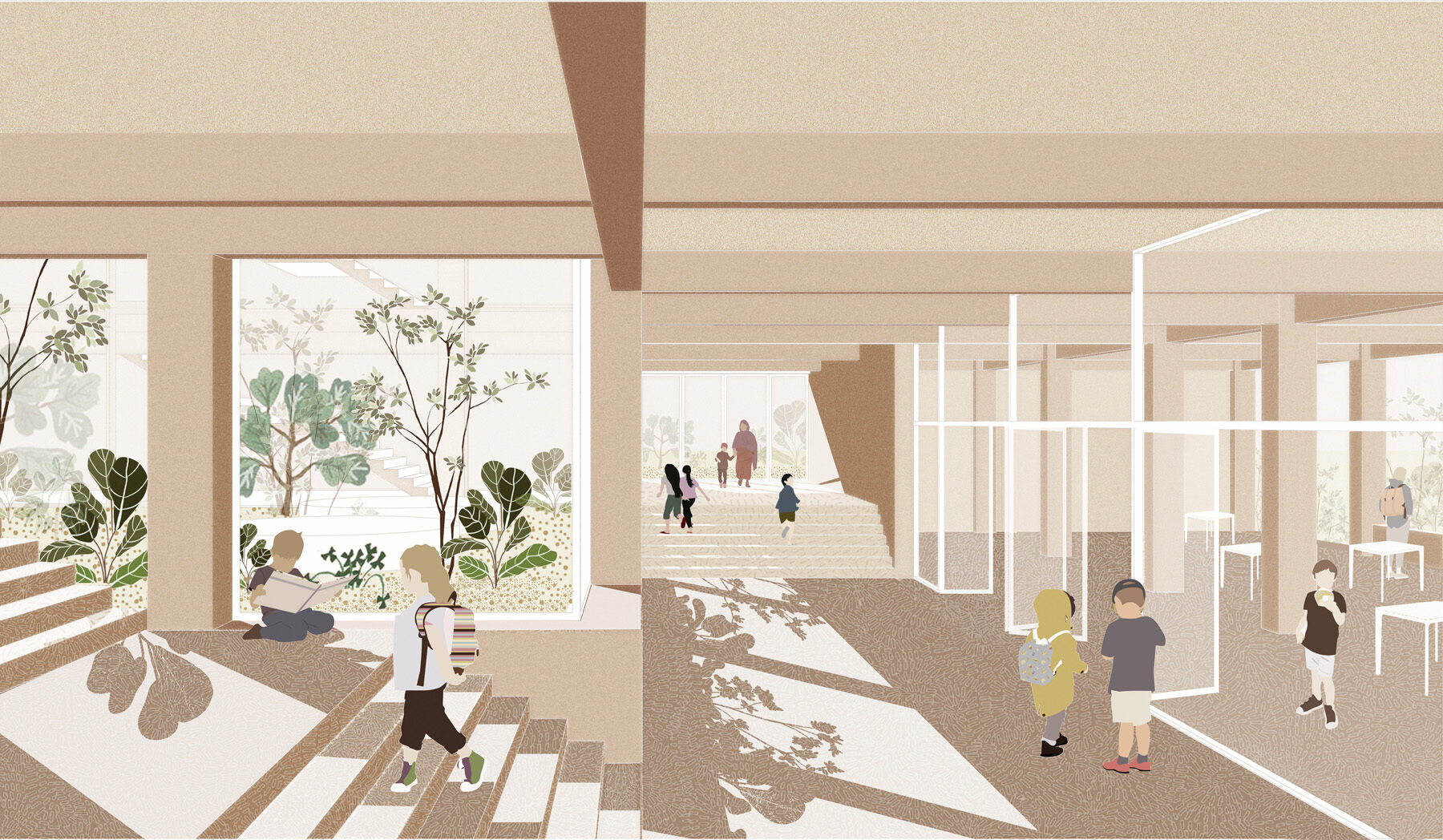 Everyday interior scene by the atrium 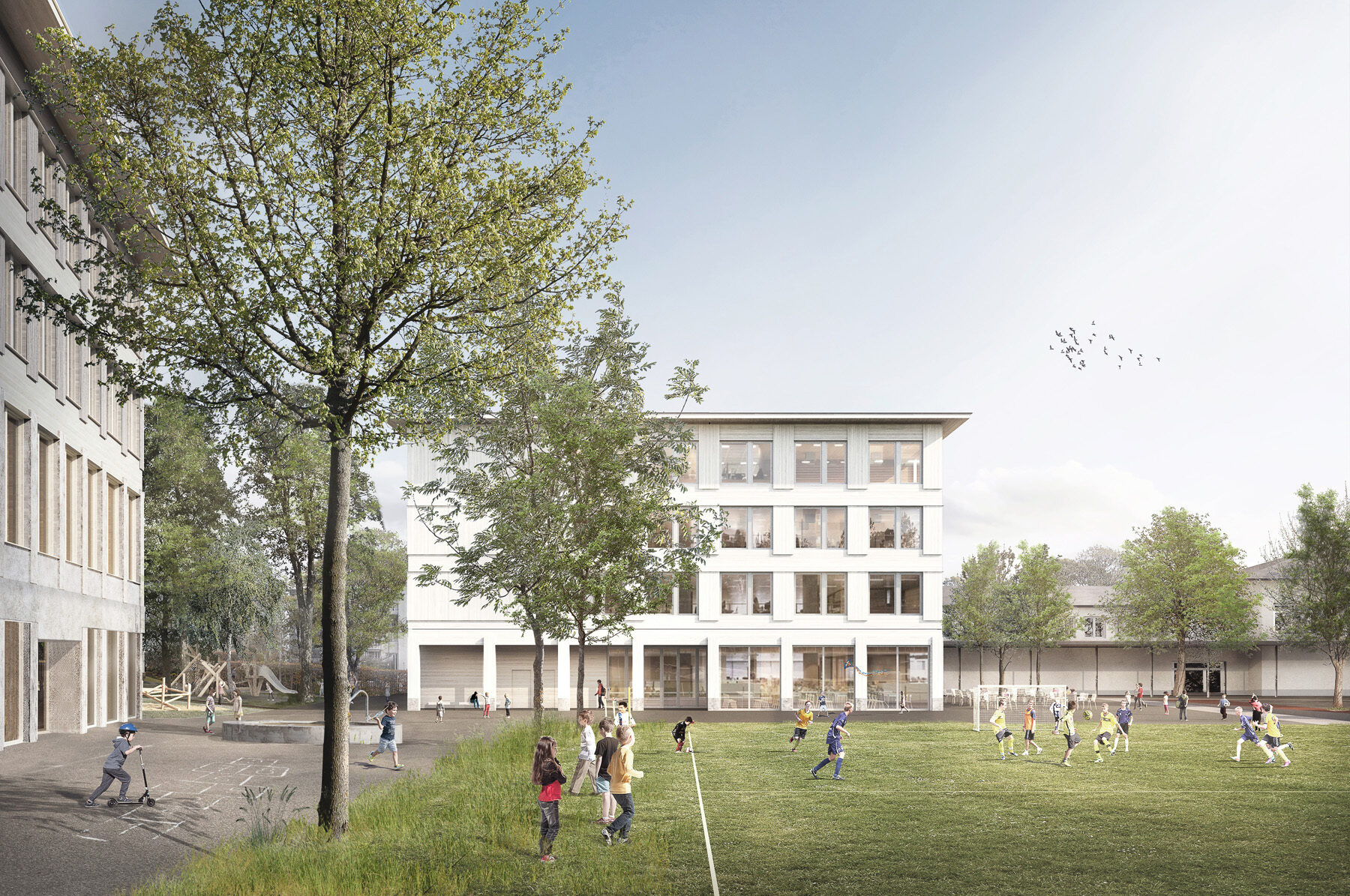 Cross section of the Triemli School 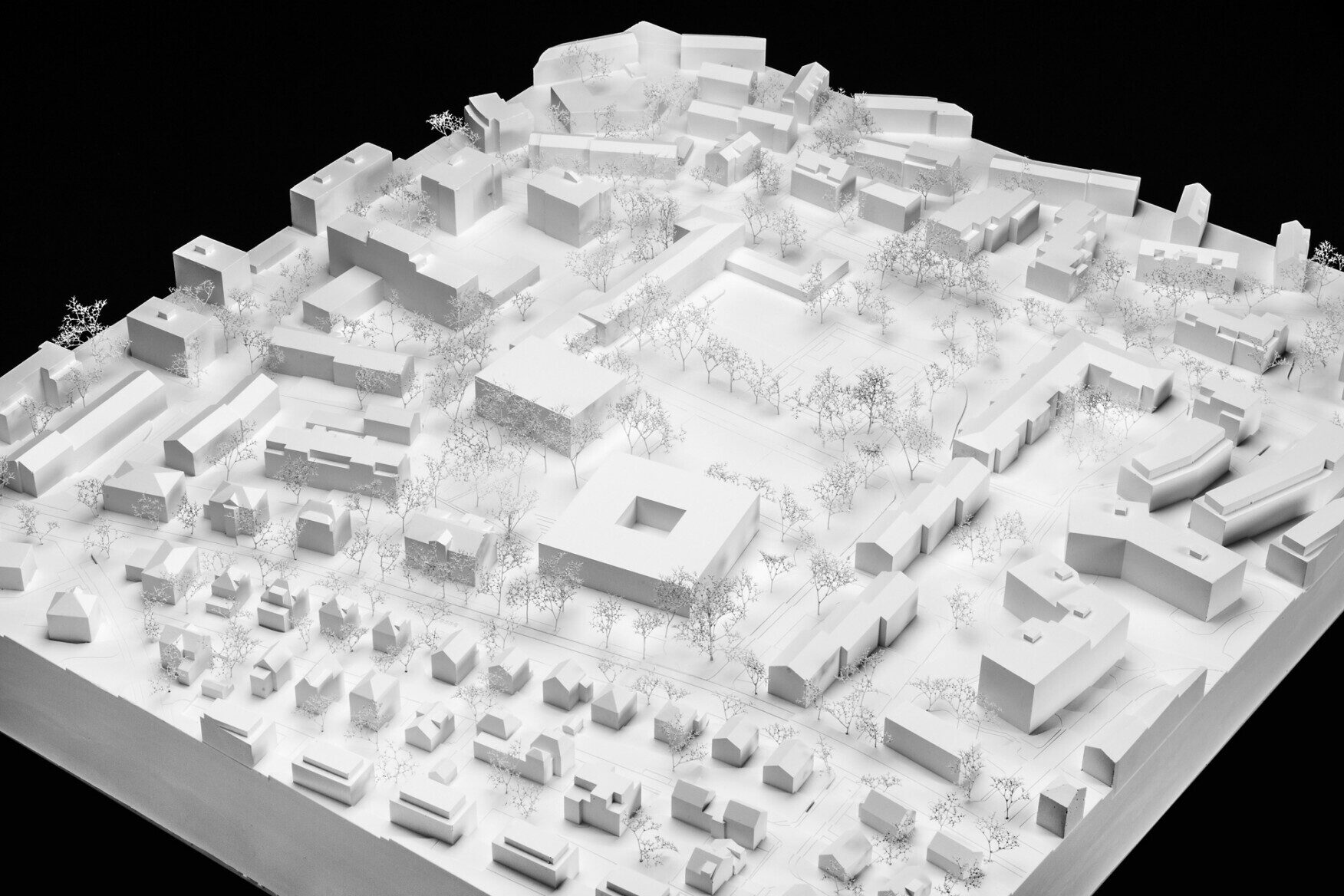 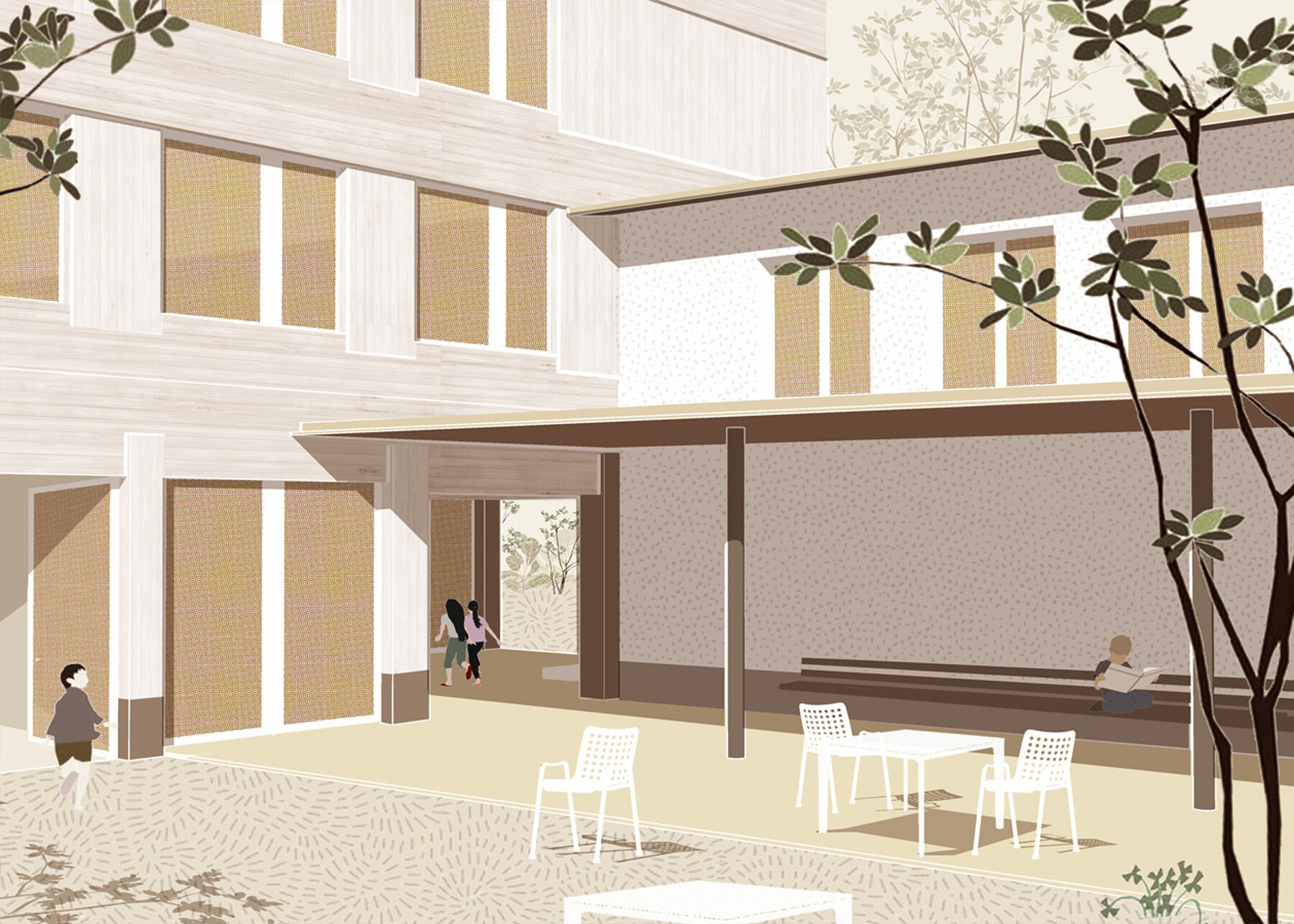 School yard of the In der Ey School 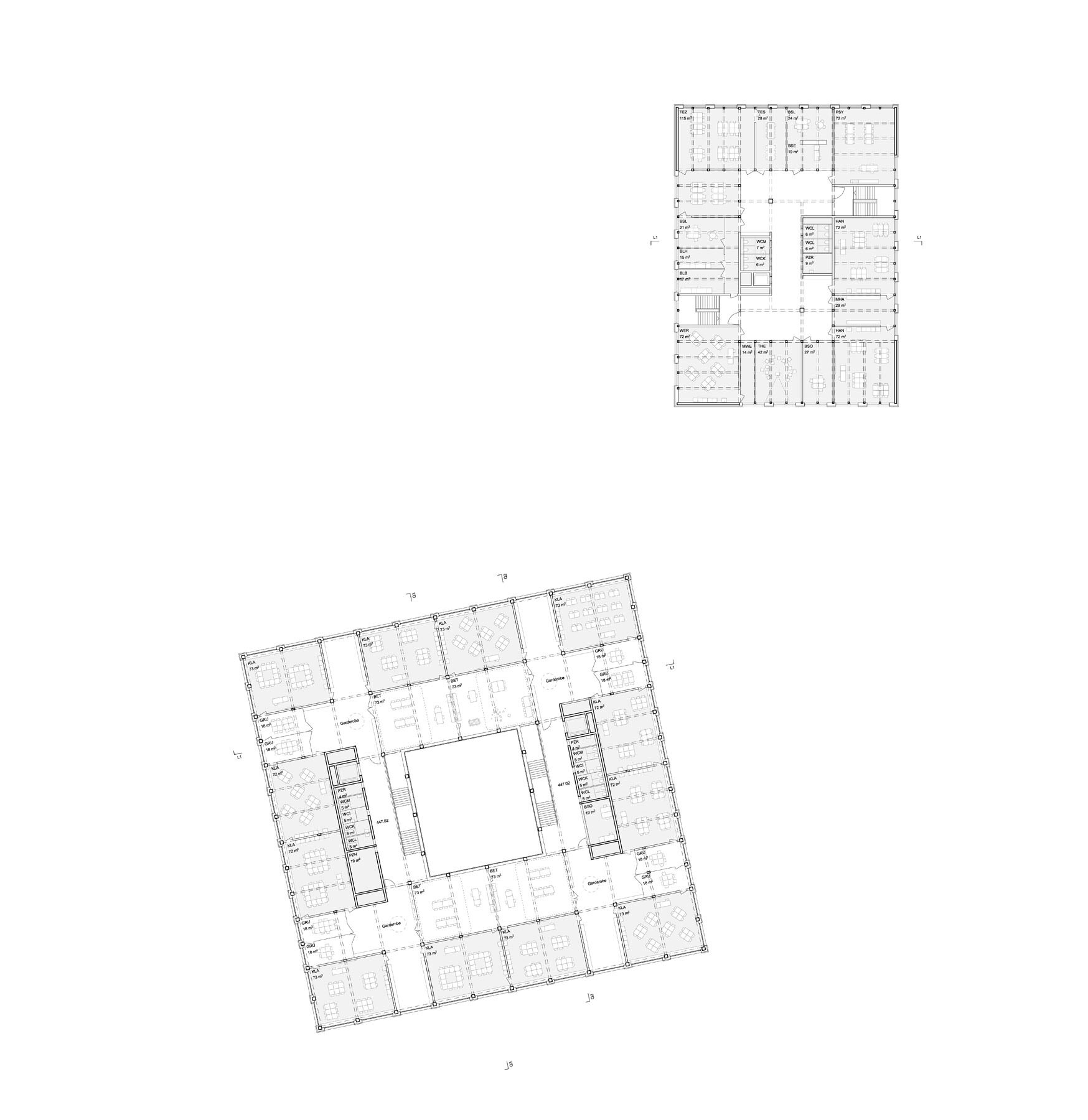 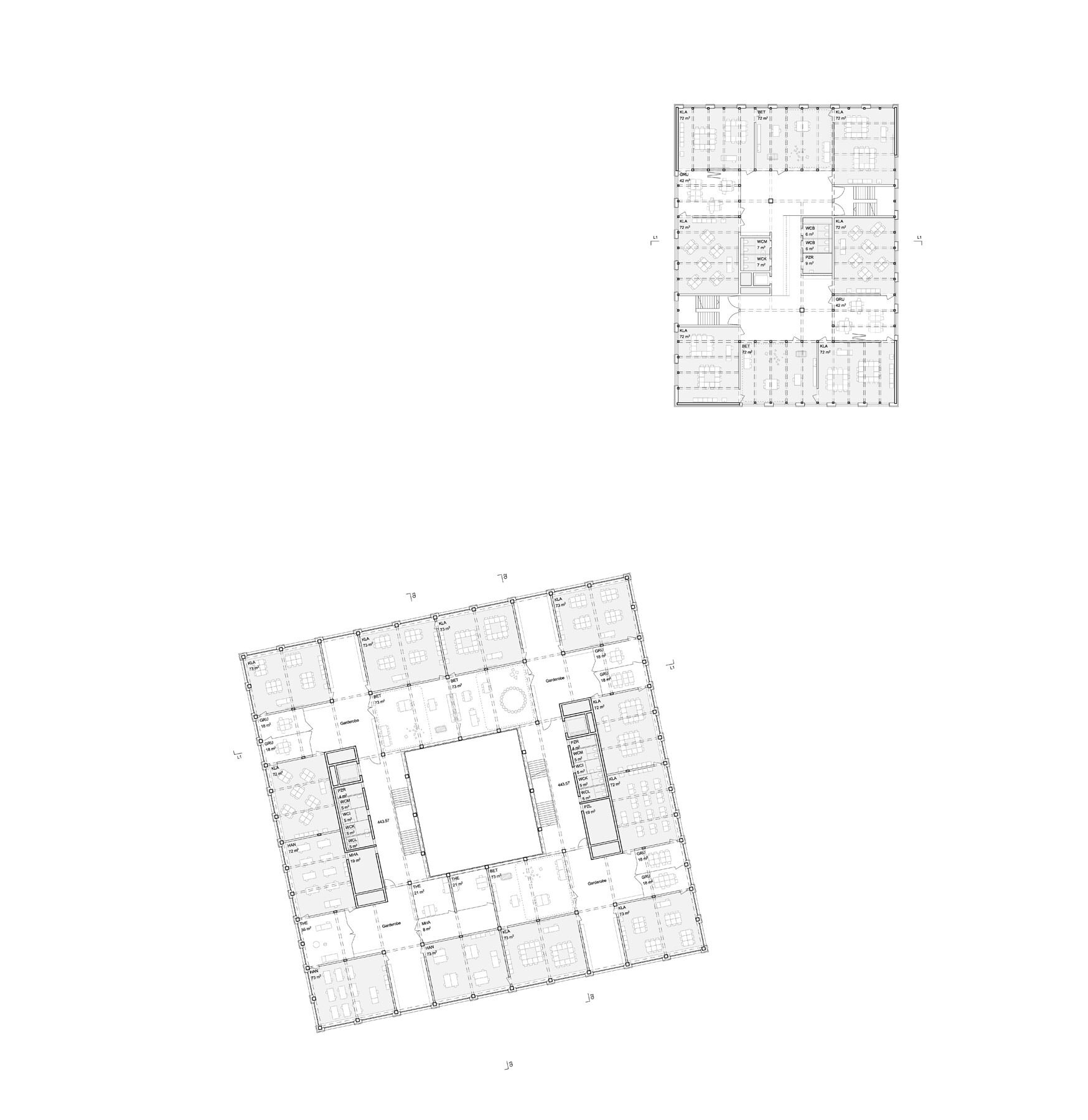 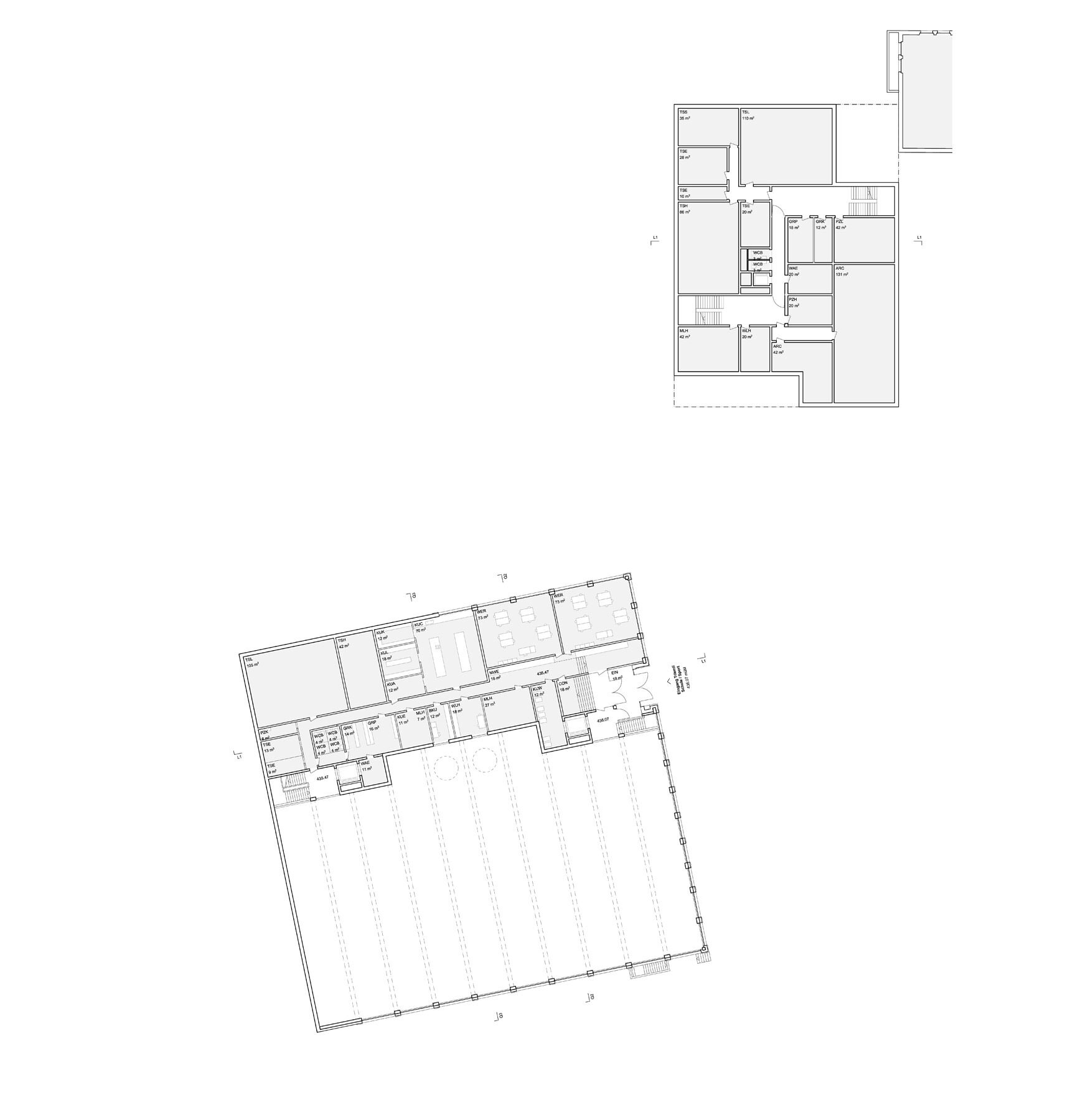 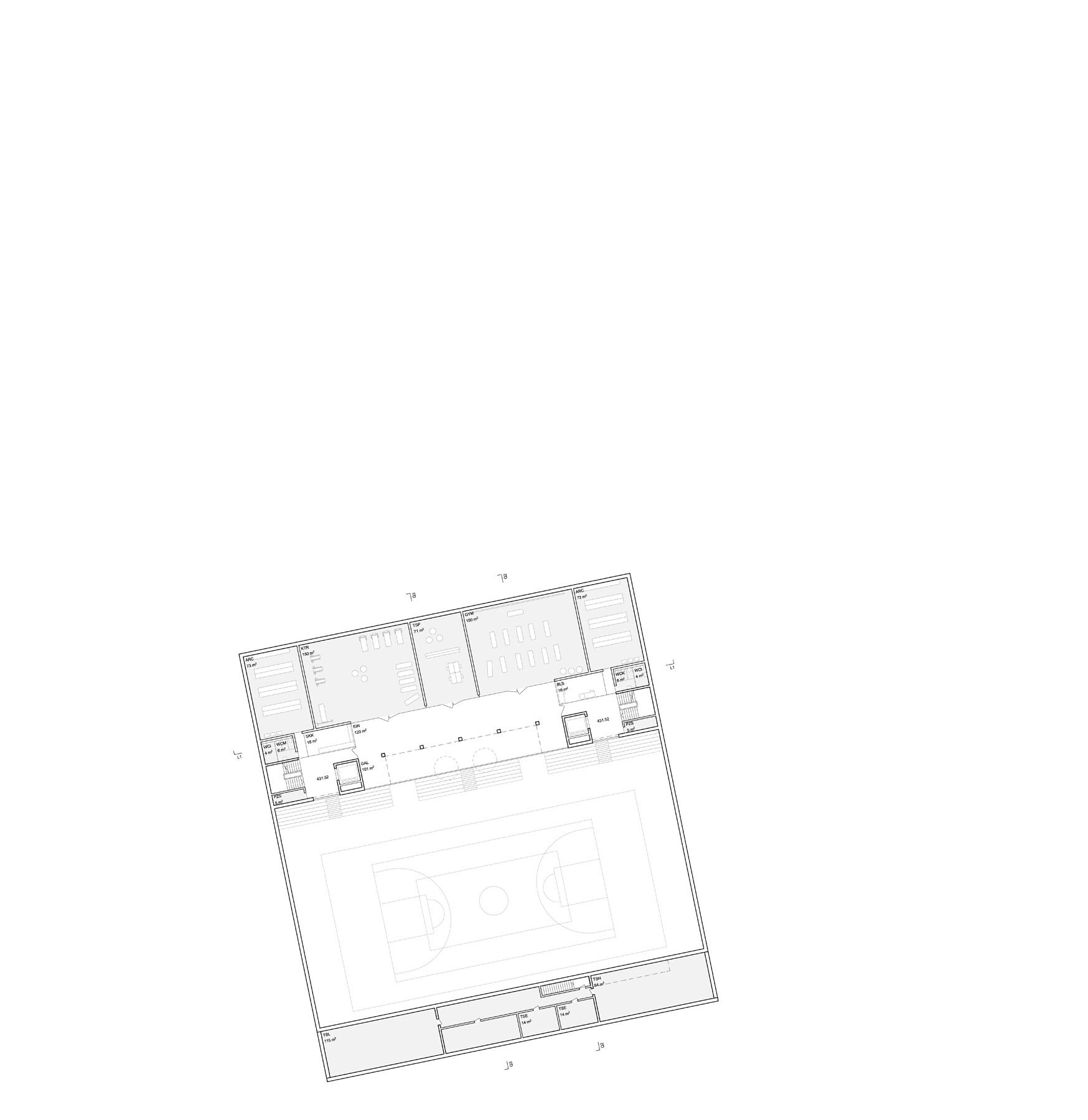 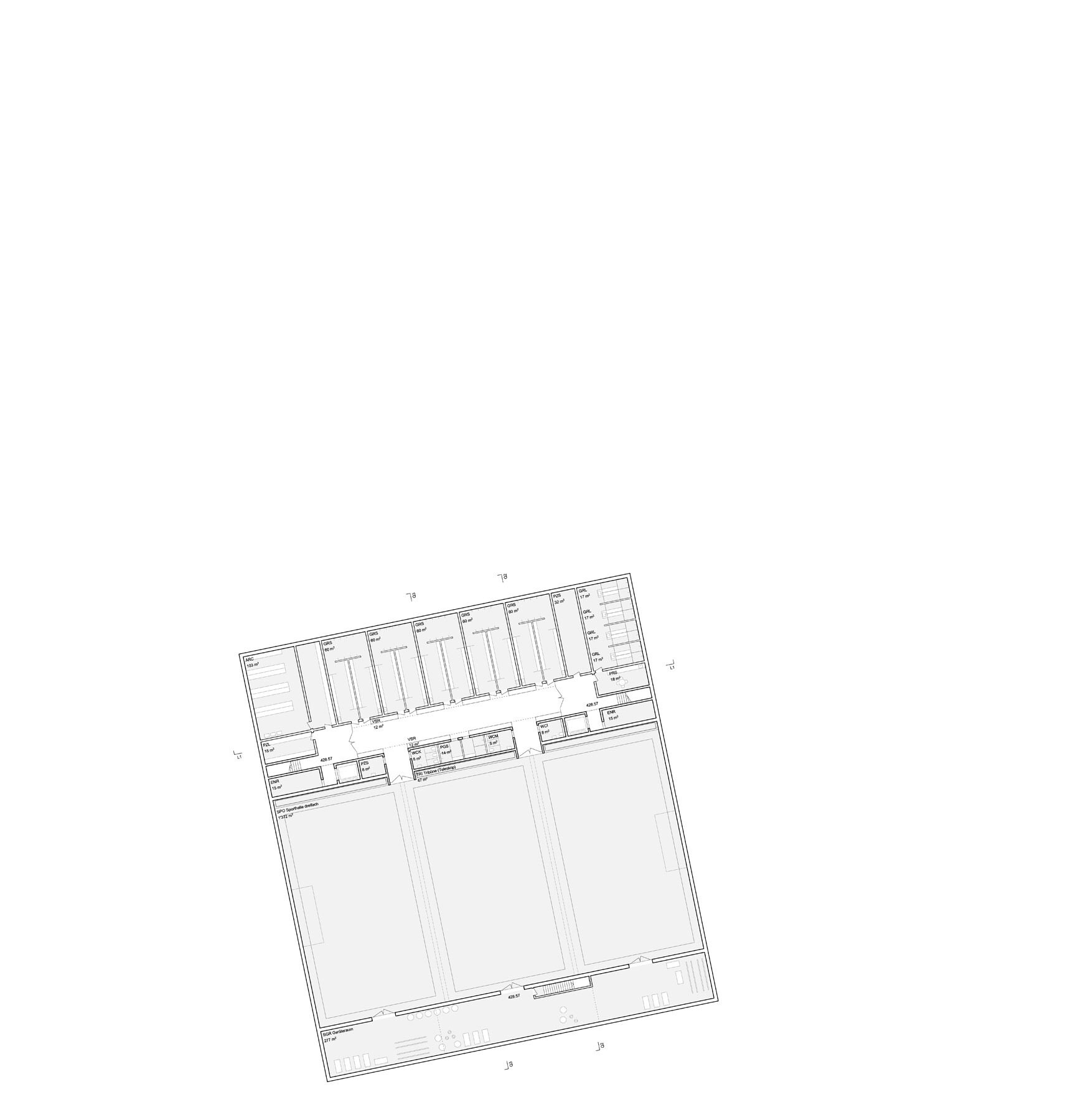