The L-shaped, 90-m-long new school building is part of a pattern of large buildings alongside Thurgauerstrasse. The building turns towards a neighbourhood park and forms a 40-m-long park facade opposite a planned high-rise building. In contrast to the proposed neighbouring buildings, the school building is deliberately kept low, which strengthens its public character and presence. Due to the difference in level, the building is only three storeys high in relation to the small-scale neighbourhood of single-family houses to the west. Courtyards in the north-west facade divide the building into smaller sections. The figure that emerges expresses the interior organisation of the school. An outdoor space and playground of the school complex is located here in the form of a linear rectangular plaza. An attractive play zone between Grubenackerstrasse and the planting gardens offers space for versatile and creative play in a gravelled area under the shade of the trees, but is also a quiet place to retreat. In the south of the site, an all-weather playground is located at the level of Thurgauerstrasse. More

The school building is accessed from the schoolyard on Grubenackerstrasse as well as from Thurgauerstrasse. Part of the building projects two metres into the street, marking the entrance on Thurgauerstrasse and identifies the building as a public building. Children, teachers and visitors reach the school from the south-east via this entrance. It leads via a generous staircase to an internal “boulevard” at the level of the playground. All uses are clearly accessible via this horizontal access area. The 18 classrooms are divided into clusters that are accessed from the “boulevard” and the break area via three separate staircases.
On the ground floor, a kindergarten with its own outdoor area is found, as well as the refectory and the multi-purpose room, which are oriented towards the park. The library, workrooms and additional needs rooms are also located here. The six clusters are located on the two upper floors of the main building, each consisting of three classrooms, two group rooms and a structurally offset care room. These classrooms are grouped around a common centre per cluster, which serves as a lounge, cloakroom and extended classroom. Group rooms with sliding doors are set adjacent to the neighbouring cluster, which also provides horizontal access to the school building through these rooms. The workshops and therapy rooms are located in the park-side wing of the building. The staff areas, school administration and secretary’s office are also located here. This wing has its own staircase and lift access from the level of the schoolyard. The access to the sports area with a double sports hall and a canteen is located on the ground floor of the building. The music rooms are also located here.
A regular ribbon facade, independent of the load-bearing structure, characterises the design of the building. The 1.375 m plan grid also structures the building on the outside. The panels under the windows consist of a rear-ventilated corrugated polycarbonate facade. Cost-effective, standardised photovoltaic panels are mounted behind it. This semi-transparent facade of the building only becomes visible at second glance, allowing for multiple readings. Depending on the time of day and the lighting mood, the house appears very different, as the light is reflected to different degrees in the facade.
Trellis frameworks along the opaque end facades enable dense, vertical greening of large facade sections, with plants rooted in the ground. Radially stretched trellis ropes provide a green veil to the half-courtyards. As a “fifth facade”, the large roof, which is visible from all surrounding buildings, is intensively greened. This represents considerable added value, both ecologically and aesthetically, which is only possible because the required photovoltaic surfaces are integrated into the facade and the thermal collectors (PVT) are integrated along the edge of the roof.
Less 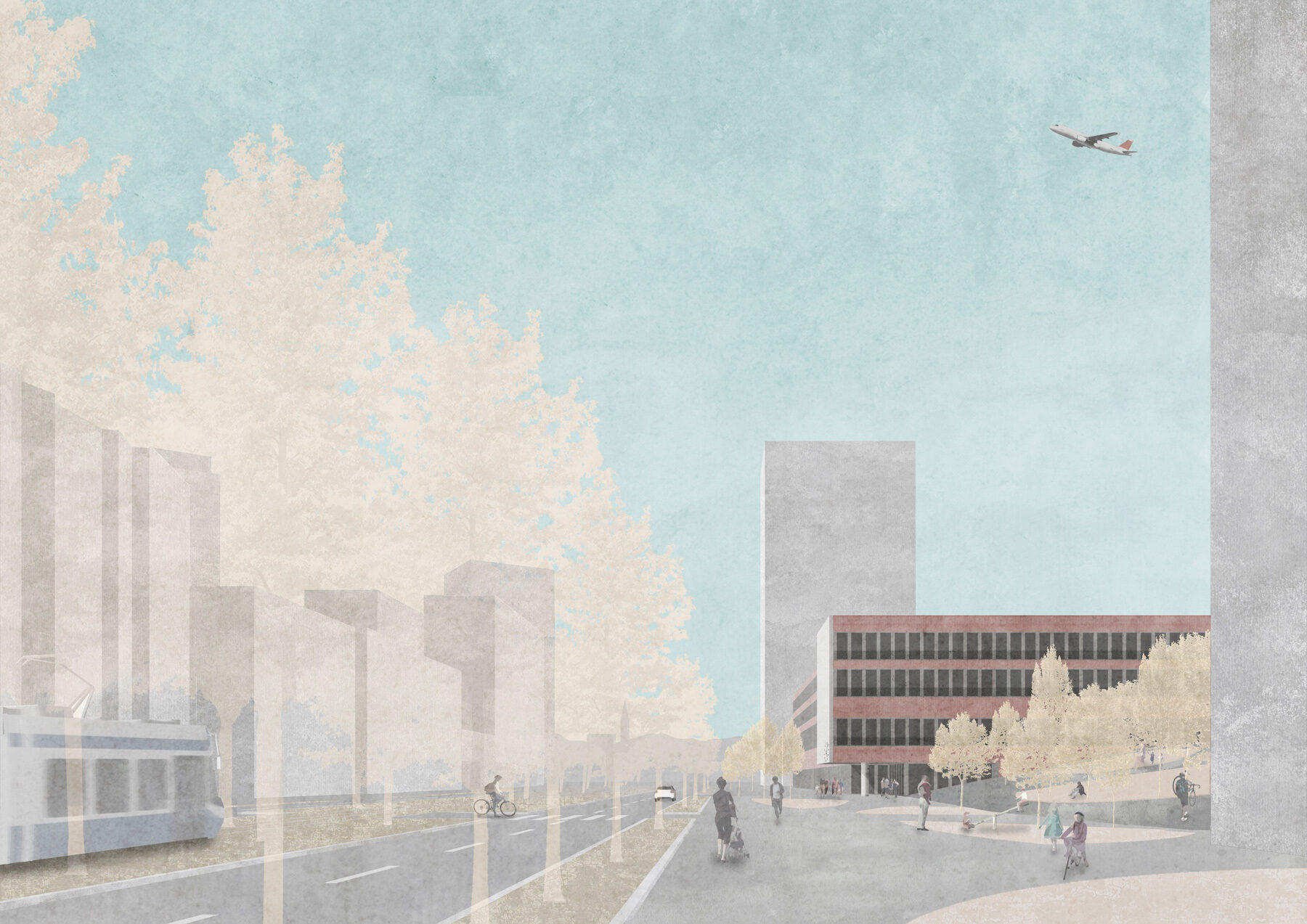 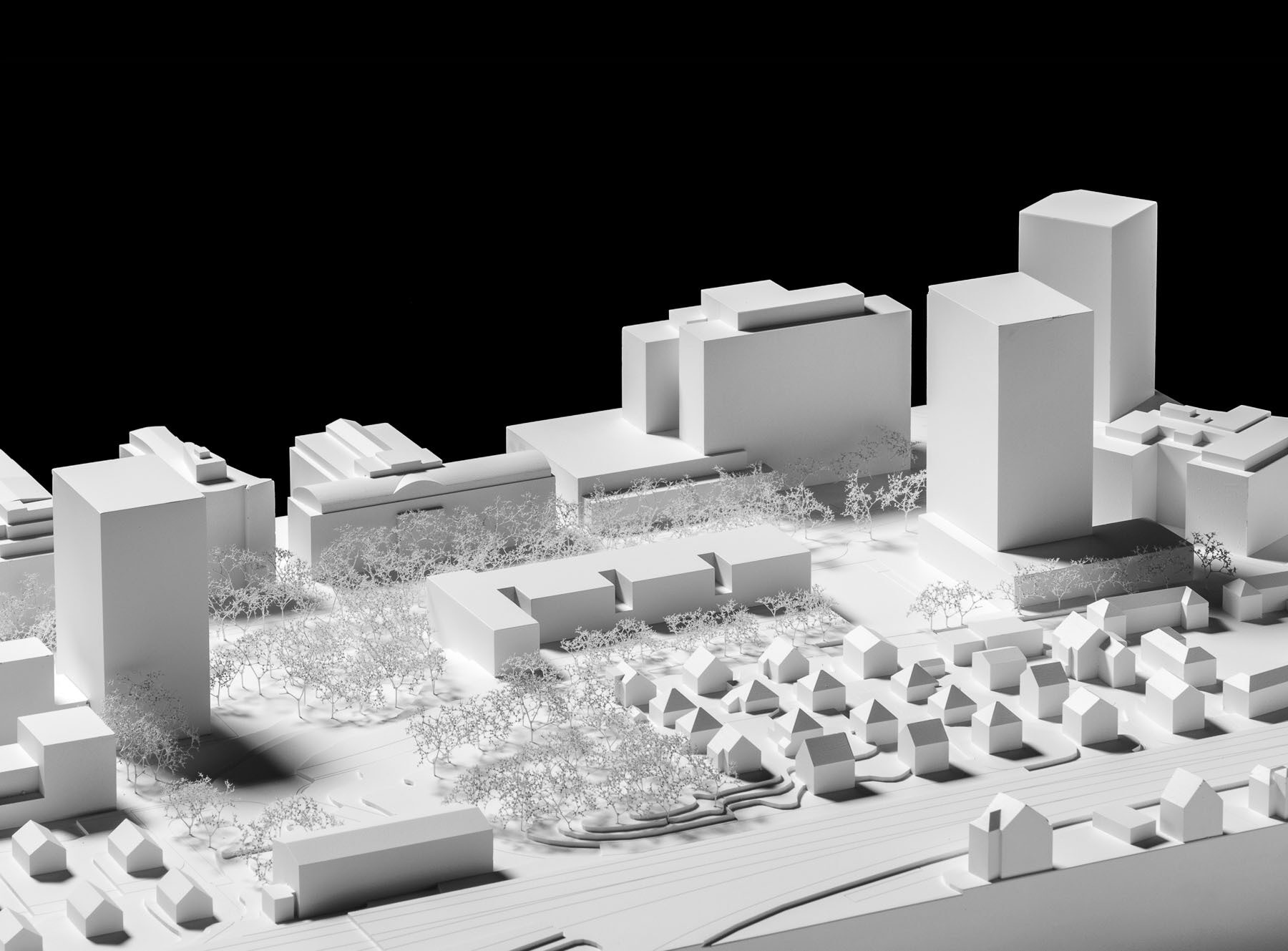 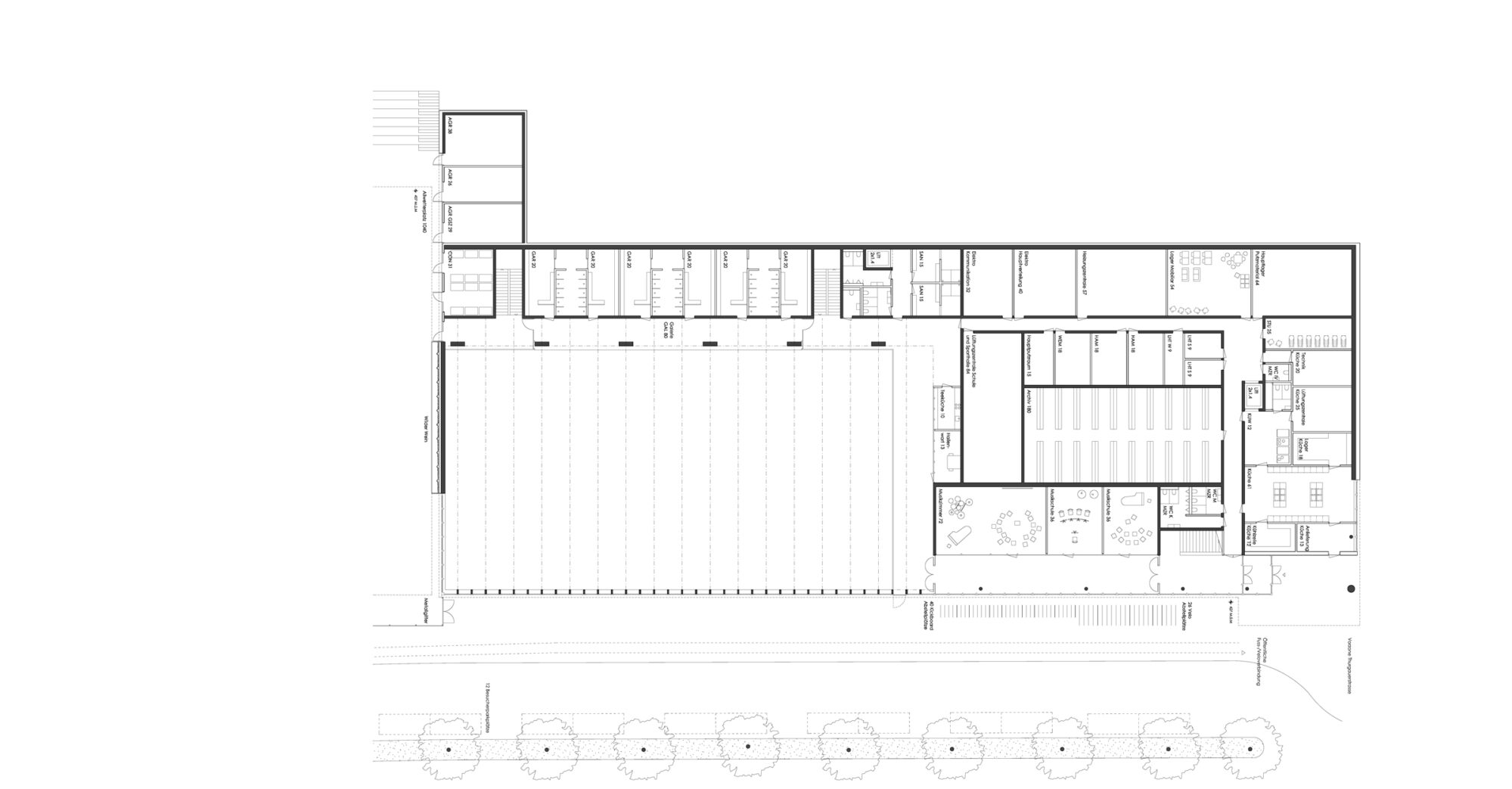 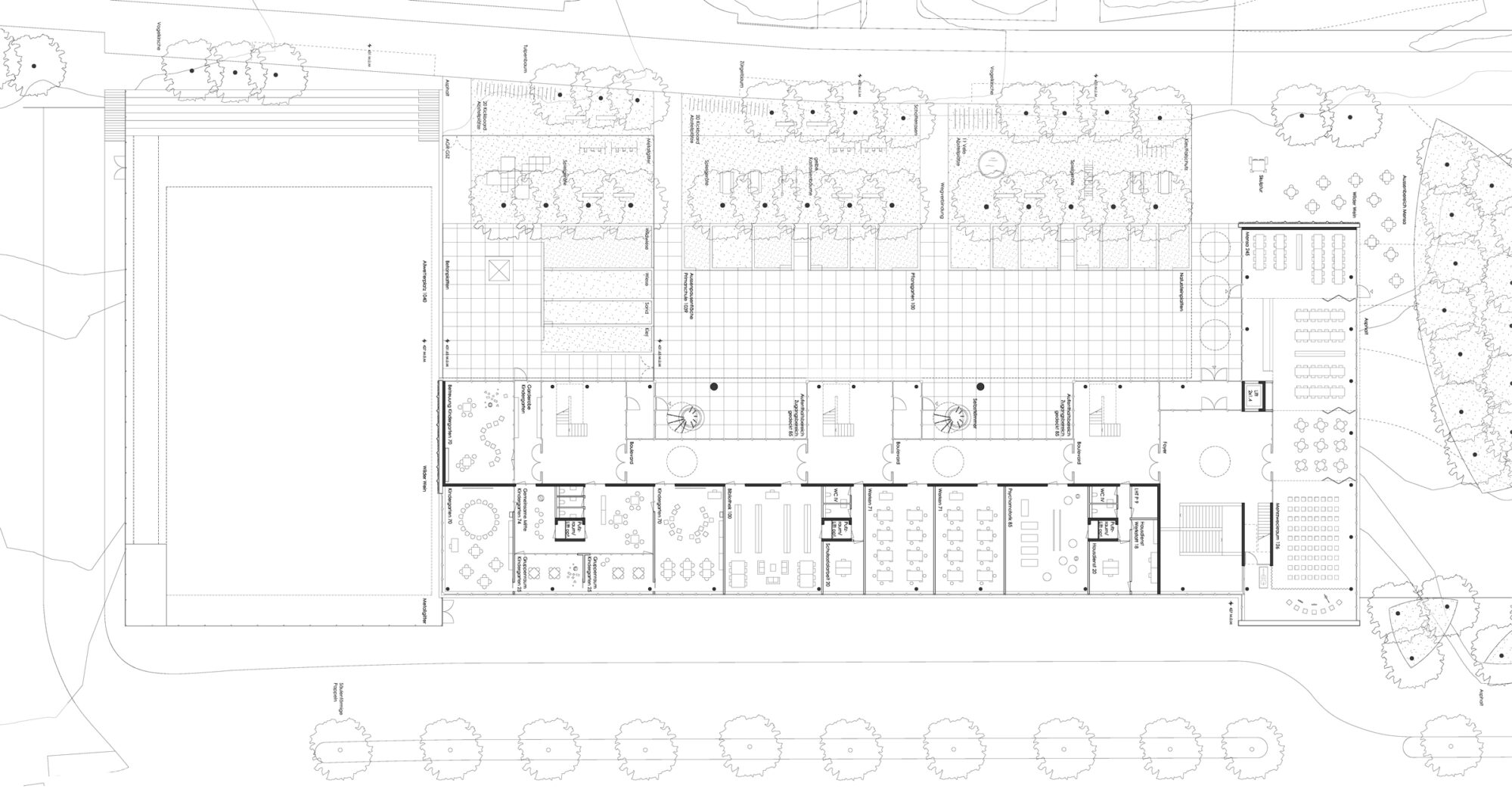 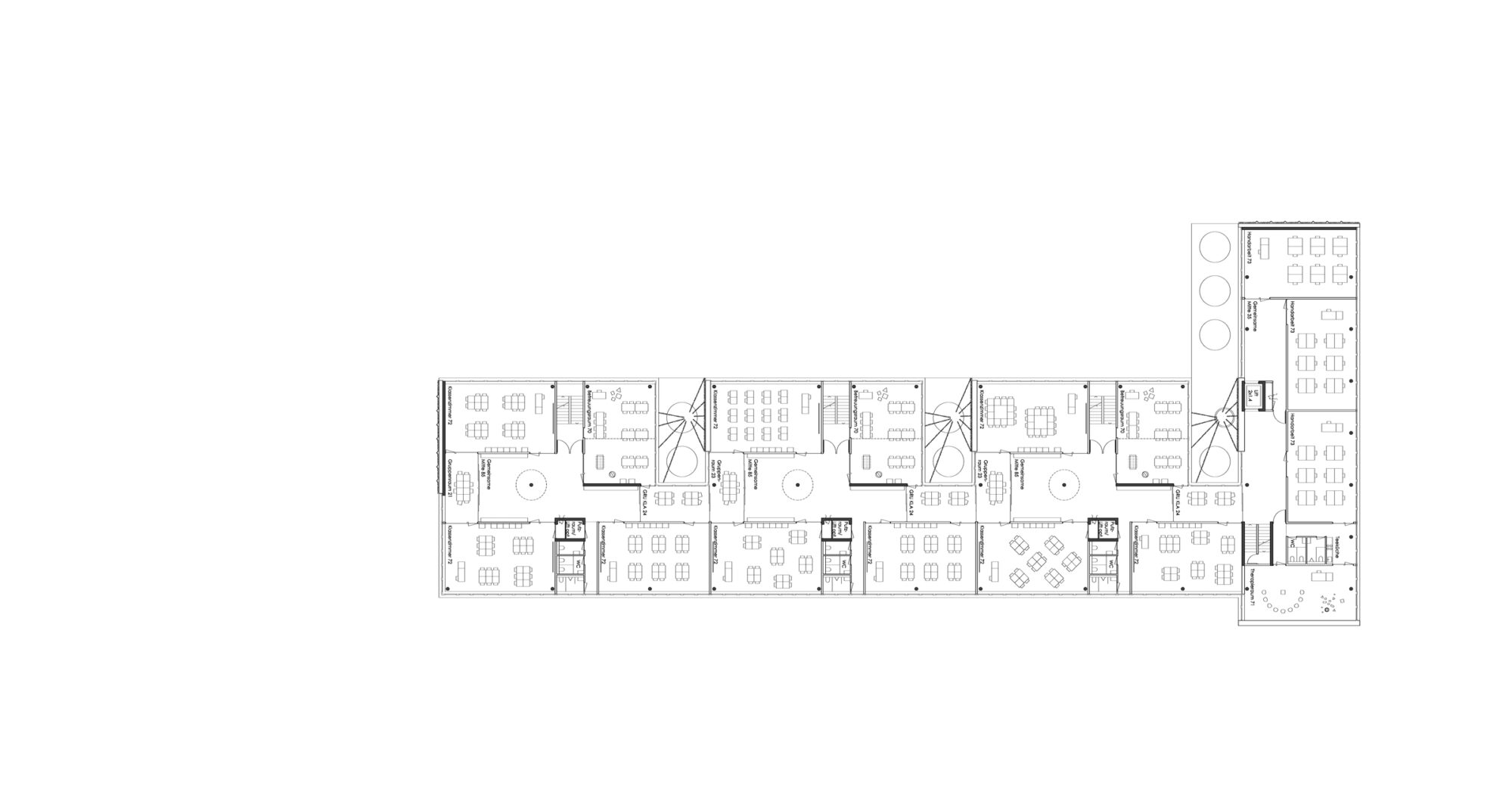 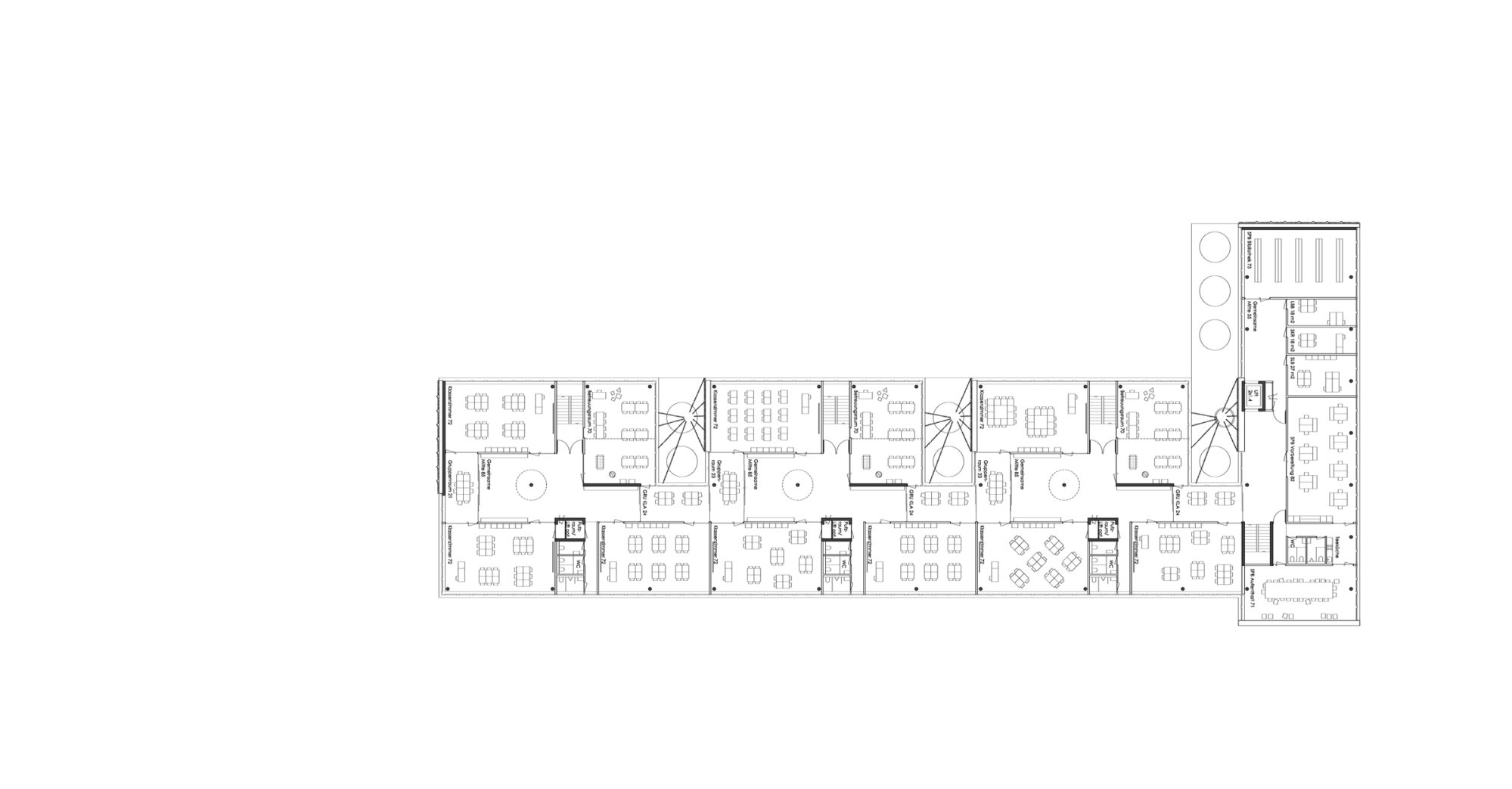 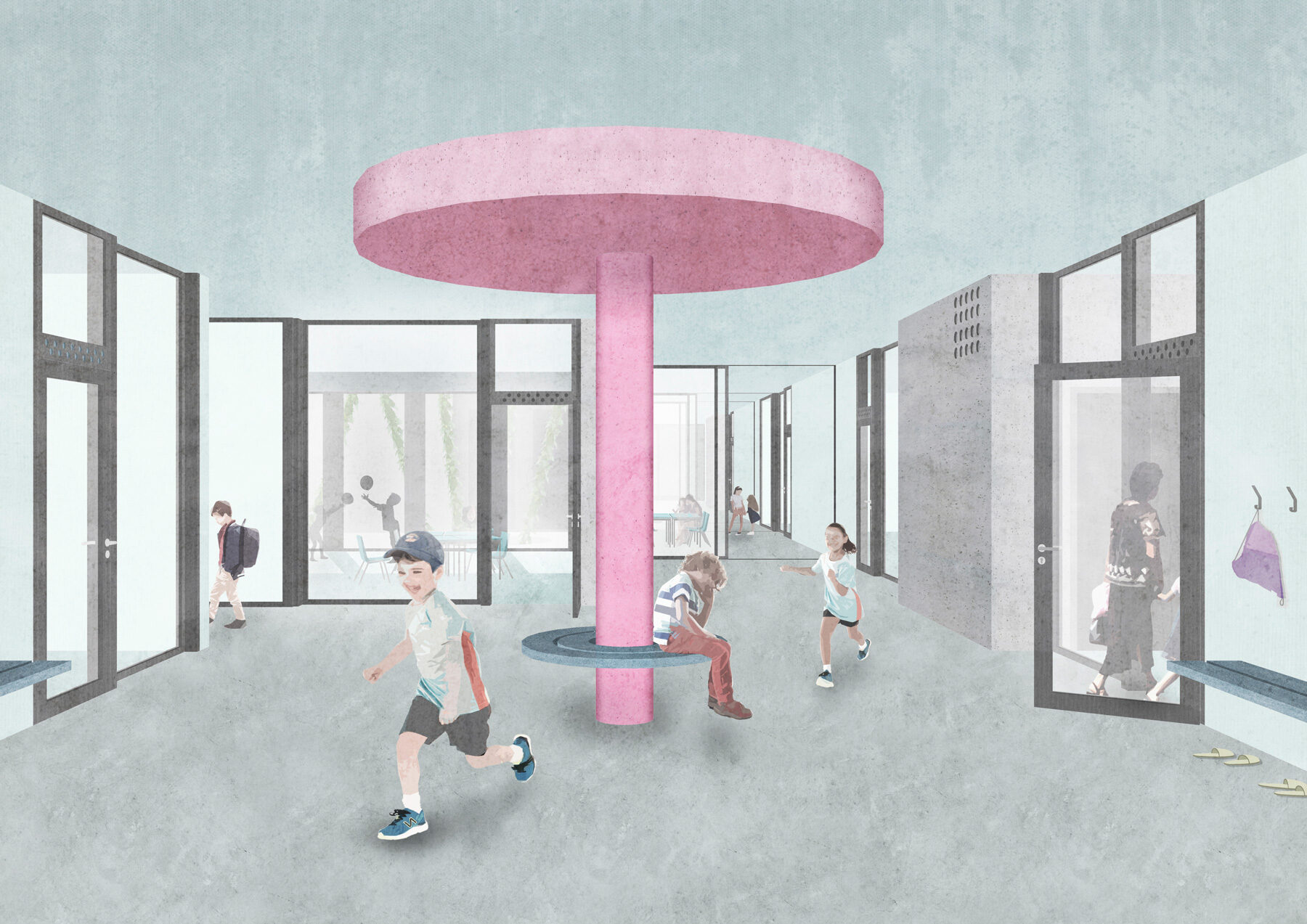 Elevation towards the playground 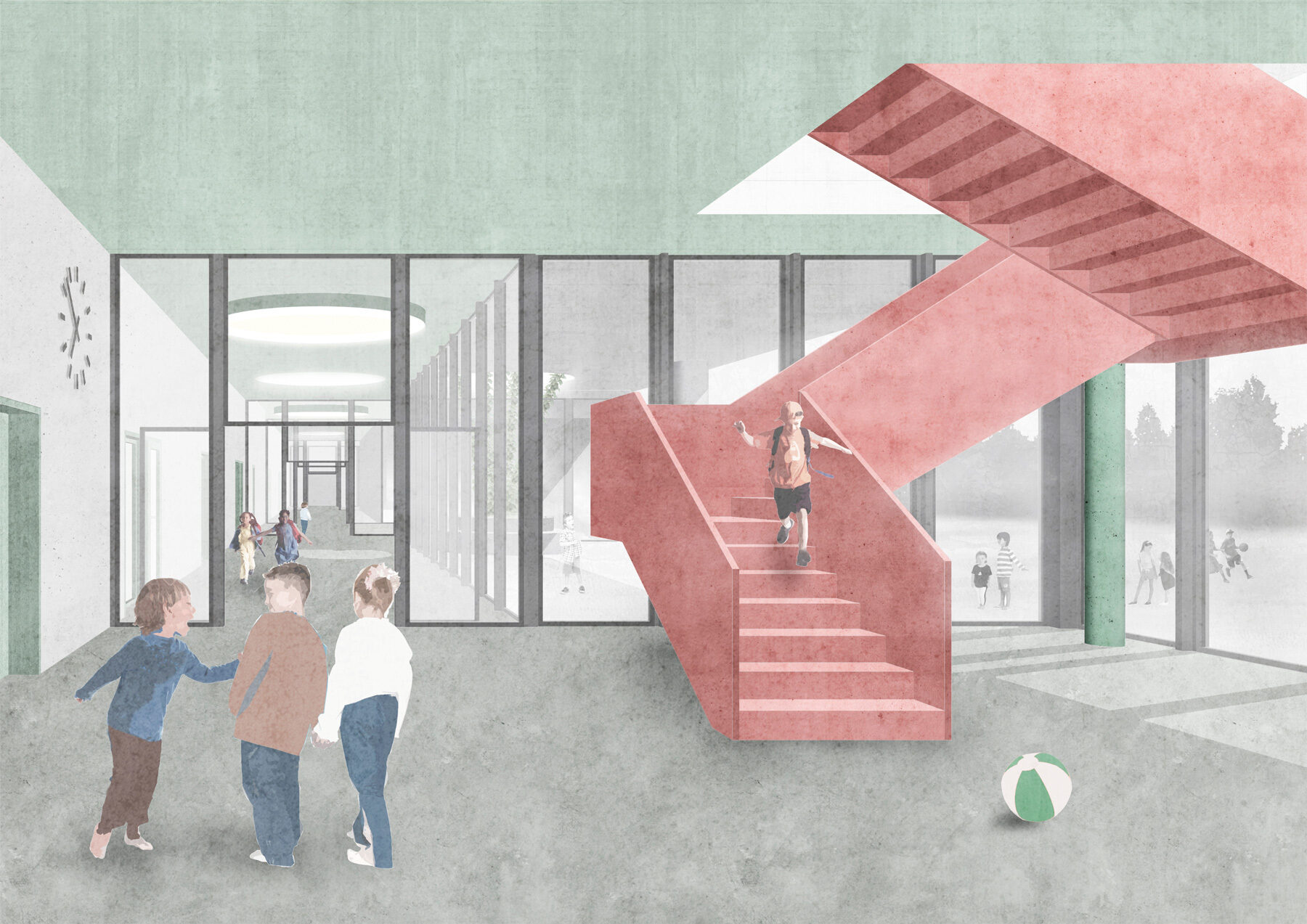 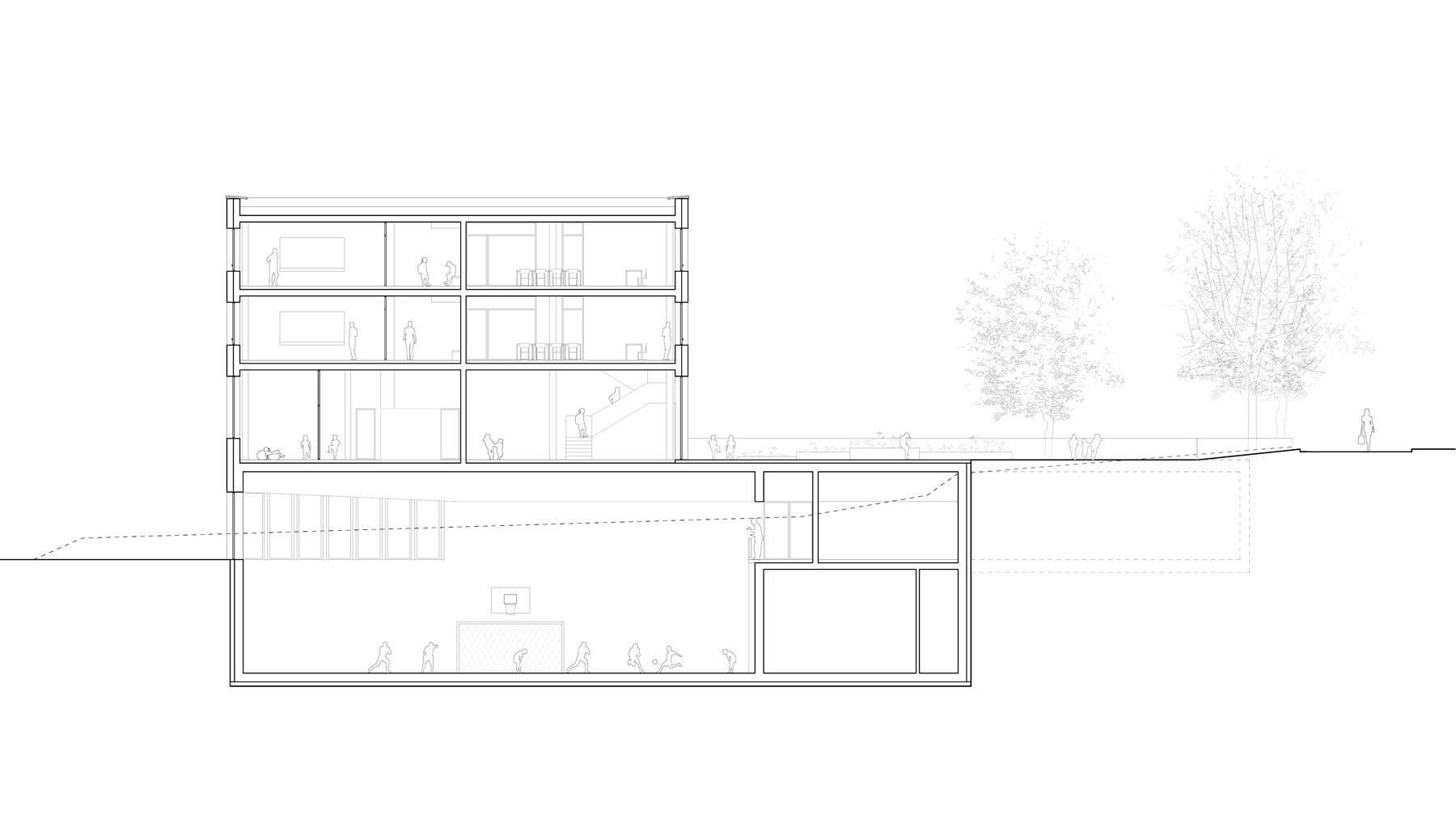 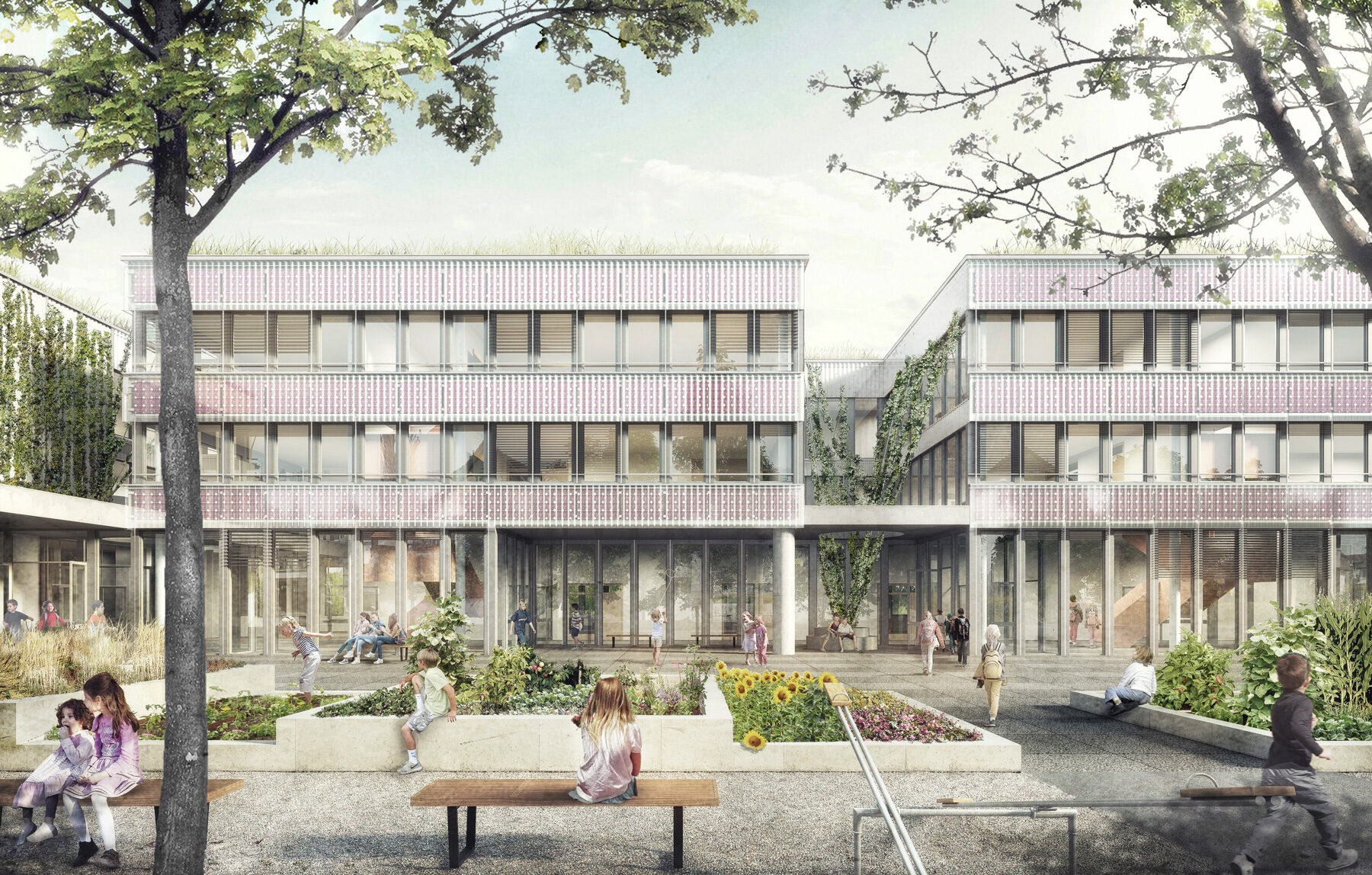 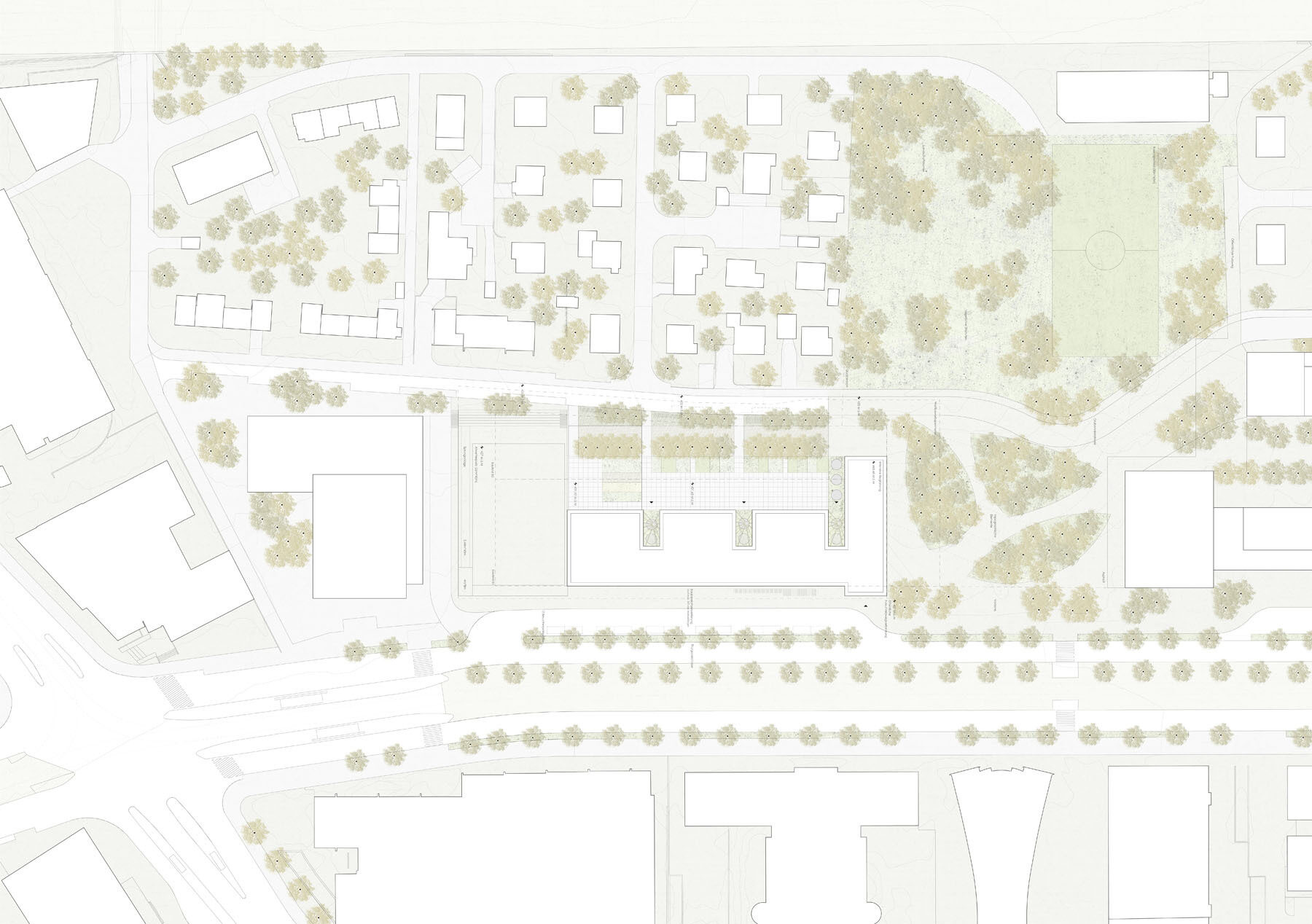